Iceland’s relationship with books is one that, as a writer and bibliophile, has me in tears. I could move to the the land of ice and fire quite happily based solely on how passionate everyone is about literature.

It’s estimated that 1 in 10 Icelanders will write a book in their lifetime and the small, Nordic country has more writers, more books published and more books read than anywhere else in the world.

It came as no surprise to  learn Iceland has a special celebration for books, one which practically the whole country participates in. It’s called jólabókaflóð which translates to the ‘Christmas Book Flood.’

The celebration actually begins in September, when the Icelandic Book Association posts a book catalogue to every home in Iceland. (The catalogue is called Bókatíðindi and you can browse this year’s edition here if you would like.)

So, from September onward there’s a book buying hysteria in Iceland, which culminates on Christmas Eve when people gift each other the books they’ve been frantically buying. The rest of the evening is then spent reading. I can’t think of anything more perfect than that.

I believe so strongly that we need to be more Icelandic when it comes to our relationship with books, that I’ve put together a list of northerly reads to inspire your own jólabókaflóð.

Icelanders give paperback books on Christmas Eve, but the ones I’ve listed here are all available on Amazon Kindle, so you can have them pretty much instantly to read. If you don’t have a Kindle, (I don’t) no stress, you can download the FREE Kindle app here for IOS, Android, Mac and PC.

I’ve been wanting to read Ice Bear ever since it popped up on Amazon as a recommended read a month or so ago.

While it’s the priciest book on this list, with the Kindle Edition coming in at a hefty £15.21 if you’re invested in deepening your knowledge of this most important and beautiful species, it’s entirely worth it.

“From Inuit shamans to Jean Harlow lounging on a bearskin rug, from the cubs trained to pull sleds toward the North Pole to “cuddly” superstar Knut, it all comes to life in these pages.

With meticulous research and more than 160 illustrations, the author brings into focus this powerful and elusive animal. Doing so, he delves into the stories we tell about Nature–and about ourselves–hoping for a future in which such tales still matter.” – Amazon.

Dark Matter is one of my all-time favourite books, and I featured it in my Top Ten Ten Books About The North list  back in February. It’s a gloriously creepy ghost story set in

the High Arctic and it leaves no nerve unturned.

For years I longed for a book like Dark Matter and when it came along, it was everything I wanted and more. There’s a really good reason this book has nearly 400 reviews on Amazon and almost a full 5 stars. If you choose Dark Matter, you’ll be up all night reading, I promise.

‘January 1937. Clouds of war are gathering over a fogbound London. Twenty-eight year old Jack is poor, lonely and desperate to change his life. So when he’s offered the chance to join an Arctic expedition, he jumps at it. Spirits are high as the ship leaves Norway: five men and eight huskies, crossing the Barents Sea by the light of the midnight sun. At last they reach the remote, uninhabited bay where they will camp for the next year. Gruhuken.

But the Arctic summer is brief. As night returns to claim the land, Jack feels a creeping unease. One by one, his companions are forced to leave. He faces a stark choice. Stay or go. Soon he will see the last of the sun, as the polar night engulfs the camp in months of darkness. Soon he will reach the point of no return – when the sea will freeze, making escape impossible.

And Gruhuken is not uninhabited. Jack is not alone. Something walks there in the dark…’ – Amazon

The Nordic Theory Of Everything By Anu Partanen

The Nordic Theory Of Everything is another book I’ve been longing to read, and now that it’s available on Kindle for 99p I’ll be delving into it this Christmas eve. Since living in Sweden, it’s come to my attention that, actually, not everything is as rosy as the majority of literature out there would lead you to believe…so it’ll be really interesting to read, reflect and no doubt debate the theories within its 432 pages, even if I’m outnumbered 10 to 1 this Christmas time.

‘From childcare to healthcare provision for the elderly and tackling issues of homelessness, the Nordic countries are world leaders in organising society – no wonder Finland has been ranked among the happiest places in the world.

But when Finnish journalist Anu Partanen moved to America, she quickly realised that navigating the basics of everyday life was overly complicated compared to how society was organised in her homeland. From the complications of buying a mobile, to the arduous task of filing taxes, she knew there was a better way and as she got to know her new neighbours she discovered that they too shared her deep apprehensions.

The Nordic Theory of Everything details Partanen’s mission to understand why America (and much of the Western world) suffers from so much inequality and struggling social services. Filled with fascinating insights, advice and practical solutions, she makes a convincing argument that we can rebuild society, rekindle optimism and become more autonomous people by following in the footsteps of our neighbours to the North.’ – Amazon

I saw the cover of this book and thought to myself, ‘if I don’t enjoy this, I’m going to be really disappointed.’ I needn’t have worried though, as I took advantage of the ‘Look Inside’ feature on Amazon, had a read of a few pages and knew it was going to be a beautiful, captivating and enlightenment little read, from which I’d come away from a more learned and inspired reindeer obsessive.

‘In this enchanting book, Tilly Smith leads the reader through the cold and extraordinary natural history of the reindeer.

A creature that is often used to adorn the winter season, the reindeer has been domesticated in Eurasia for longer than the horse while in North America it exists side by side with the humans, never tamed yet vital to the native settlements.

Despite the popularity of the image of the reindeer, they are rarely seen in real life.

This beautiful, comforting little book, peppered with anecdotes about the author’s own herd, is sure to kindle affection for one of nature’s most adaptable mammals, from fur-covered hooves to downy antlers.’ – The History Press

While I’ve read (very) mixed reviews about this ‘fast, fun, educational and true story’ written by a journalist from Chicago who went to Iceland with his two friends, one of whom, Matthew Trinetti, is the main character in the book, it intrigued the hell out of me. And, seen as though I can get it free on Kindle Unlimited (if you don’t have Kindle Unlimited, get it. Seriously. It’s brilliant.) I thought why not. 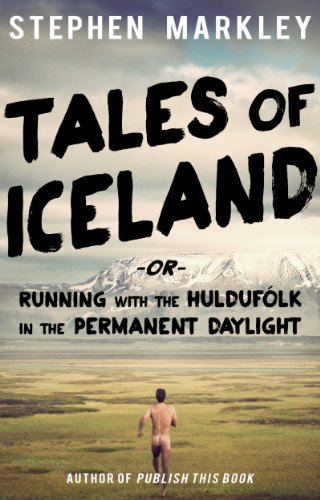 Seven years later, Markley set out with two friends for Iceland, and adventure would ensue. The three young men found a country straddling Europe and North America, recovering from its 2008 economic crisis, struggling to regain its national identity, influenced by the entire globe yet trafficking in its singular Icelandic sagas and legends.

With Tales of Iceland, Markley delivers the fastest, funniest memoir and travelogue of an American experience in Iceland.

Beware: You will NOT learn how to say “Which way to the potato farm” in the Icelandic language. Nor will you learn how to locate the finest dining options in Reykjavik, or the best opera house. This is not that kind of travel book. Markley and his two irrepressible twenty-something American pals do not like opera, had no money to eat much besides eggs and skyr, and learned only how to say “Skál!” “Takk,” and “Skyr.” – Amazon

I only found out about this book and it’s author Horatio Clare today, but this book is on my ‘must read before the end of 2018 list.’

‘We are celebrating a hundred years since independence this year: how would you like to travel on a government icebreaker?’

A message from the Finnish embassy launches Horatio Clare on a voyage around an extraordinary country and an unearthly place, the frozen Bay of Bothnia, just short of the Arctic circle. Travelling with the crew of Icebreaker Otso, Horatio, whose last adventure saw him embedded on Maersk container vessels for the bestseller Down to the Sea in Ships, discovers stories of Finland, of her mariners and of ice.

Finland is an enigmatic place, famous for its educational miracle, healthcare and gender equality – as well as Nokia, Angry Birds, saunas, questionable cuisine and deep taciturnity. Aboard Otso Horatio gets to know the men who make up her crew, and explores Finland’s history and character. Surrounded by the extraordinary colours and conditions of a frozen sea, he also comes to understand something of the complexity and fragile beauty of ice, a near-miraculous substance which cools the planet, gives the stars their twinkle and which may hold all our futures in its crystals.’ – Amazon

Other Titles To Check Out

Finding Sisu: In Search Of Courage, Strength And Happiness The Finnish Way By Katja Pantzar