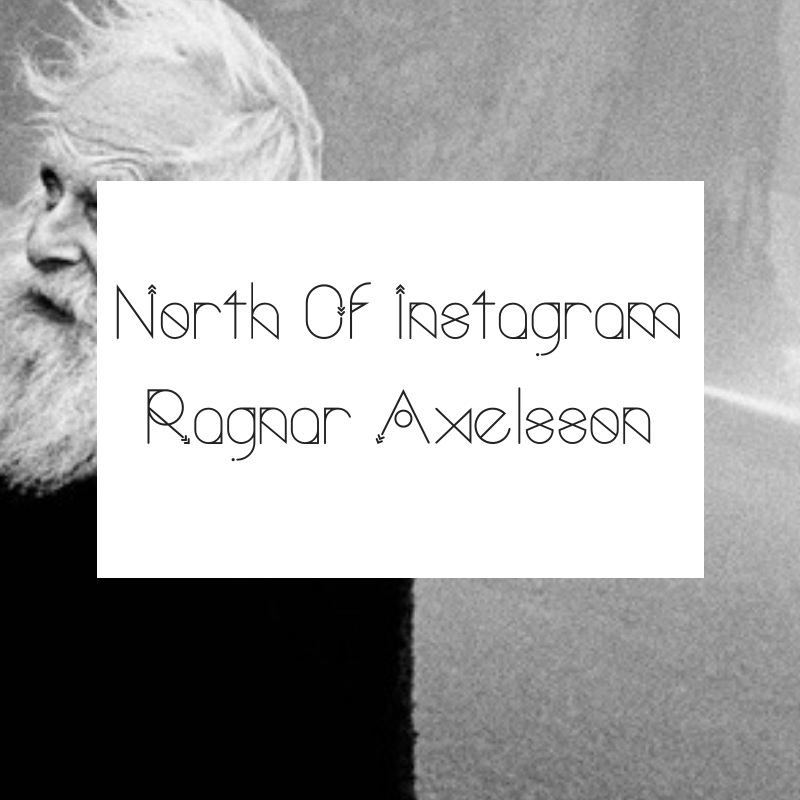 My life changed when I first encountered the work of Icelandic photographer Ragnar Axelsson, through his profound and powerful first book Faces Of The North over ten years ago.

When I was studying Axelsson’s black and white photography, documenting the vanishing ways of life of the hunters, farmers, and fishermen in Greenland, Iceland, and the Faroe Islands I noticed my heart had started beating to a different rhythm.

As much as the north has always been a part of my existence, Axelsson’s imagery made me crave it. Crave it in such a way that learning and writing about these far northerly places – and visiting some whenever I could – became as much a part of my life as breathing, as eating, as sleeping.

As I sit here at my little desk, in a little room, in little England looking at an Axelsson postcard I sent to my parents from Iceland several years ago, I find myself feeling distressed that I’m not as far north as I need to be. However, while I can’t magic myself to Greenland or Iceland or the Faroe Islands right now, I do have Axelsson’s photography to take me there.

If this is the first time you’ve seen Axelsson’s work, I believe, I really believe you’ll come away changed and the north will have a new and deeper significance for you.

We met this lonely bear on a little island in the middle of Scoresbysund. Sailing on a sailboat with my son and friends was like sailing to the end of the world. The mysterious world of Greenland always takes me by surprise. #polarbear #greenland #arctic

In the old days, they said that the greatest virtue of Iceland’s free-ranging horses was their ability to survive the winter. These days, the accommodations for horses turned out to pasture in the wild are entirely different than in days gone by—but their ability to survive the cold hasn’t changed. The winter coats the horses grow in the fall enable them to tolerate low temperatures and storms; research shows that they can metabolize sufficient nutrition from truly meager offerings. During my winter trips in Iceland, I always keep an eye out for these unusual creatures that nature has outfitted such that they’re the only animal you’ll see outdoors year-round. This was the case during a torrential snowstorm under a northerly gale on Snæfellsnes peninsula. The horse was hunkered down with its tail end to the wind. The majestic Snæfellsjökull glacier peeked through the onslaught of snow for an instant—and just as quickly it vanished. — From the 2nd edition of the book Faces of the North. —— #iceland #leica #blackandwhite #film #35mm #horses #icelandichorse

Guðjón Þorsteinsson was walking along the shore at Dyrhólaey, hunting down a mink that had been wreaking havoc on his nesting eider ducks. His frequent companion on such outings was his dog, Gái, an accomplished mink-killer. The air was misty, and the surf was roaring. Heavy waves crashed over the boulders lining the coast below a nesting eider. Guðjón crouched beside the bird and spoke, “This duck must be psychic or at least very good at predicting the weather,” Guðjón said. “There might be a nasty storm where the waves reach way up the shore.” Guðjón lived at Garðakot with his brother, Óskar. Together the brothers took over the farm from their parents in 1970. The brothers were a lot of fun—like volcanos when the moment struck—but quick to rally. They liked to kid around, exaggerate a bit, alternate between seriousness and jest—though the line between the two was often unclear. It was all in good fun, although outsiders didn’t always get the joke. Though Guðjón showed his age, he was agile and had a youthful way about him: he scaled the cliffs at Dyrhólaey and collected eggs from Lundadrangur rock arch as if it were a walk in the park. On one such egg-collecting trip, he let a visitor come along who peppered him with questions. Guðjón had enough of the interrogation when in the middle of the climb the man asked, “What’s the name of the area just south of the rock arch?” In exasperation, Guðjón peered down at the man who hung by one hand from a fine cord 20 meters over the sea and answered curtly: “That’s what we call the Atlantic Ocean. It’s been there for quite some time.” The questions stopped abruptly after that. Guðjón and I walked home from the shore along a winding road. Gái, the dog, had managed to kill two minks. Guðjón peered up to the mountains with a knowing look in his eye, as if he had seen someone he recognized: a spirit that followed us along. When I took his picture, it was as though time stood still: he seemed immortal as if part of the landscape and the mountains, a creature of nature who descended only briefly to the human world to lift our spirits. — From the 2nd edition of the book Faces of the North. #iceland #natgeo100contest

The worst piteraq storms are utterly relentless. The snowstorm had pummeled Ittoqqortoormiit for several days. During the worst spells, you could hardly see between the houses. Still, it was a pleasure to arrive at the village after a long hunting trip out on the ice—because the cold was even worse out there. You could see the odd person darting between houses, but almost no one was outside, as the weather was so unbearable. In the dark on the sea ice, the dogsleds could be seen through the haze as they plodded towards the village. Stepping off his sled, Little Bent, a hunter from Kap Hope, was covered in snow. It took a while to chip away the crust of ice that had formed around him in the storm. Little Bent got his nickname from his small stature, but as a hunter he was a veritable giant—as he had hunted all kinds of Arctic animals to survive. He tethered his dogs on the ice below town and walked back on land where the snowstorm raged on. The village could barely be seen, if at all. It wasn’t exactly ideal weather for traveling, but Little Bent had run out of provisions and it didn’t look as if the weather was going to let up anytime soon. Bent was the sole inhabitant of Kap Hope, a small village 14 kilometers from Ittoqqortoormiit. In good weather the trip between villages by sled took only an hour, but at that time the snow was heavy and the visibility was poor. The ride went slowly, taking two and a half hours. The huskies in the village lay chained under snow. A few of them stirred as he passed. A large, powerful dog reared up on his hind legs and howled into the storm before disappearing again into the snow. The village landscape changed in the winter: the snow collected in drifts, hiding entire boats that didn’t emerge until spring. Little Bent strolled around the village, looking in on a few friends before he headed home. Darkness descended. The villagers and huskies watched Little Bent disappear into the storm to follow the faint tracks of the dogsled back to Kap Hope. They’d find their way home together, man and dogs. — From the second edition of the book Faces of the North. #leica #greenland #natgeo100contest

In Tasiusaq, a small village in southwest Greenland, this old woman turned her tired eyes to the light. She was in her nineties, as was her husband. Other villagers also came to the party at the meeting house to celebrate the first day of school. This year there was one new student. From their little house, the old couple watched the village children, dressed in their best as they walked home with their parents. Fall was approaching, and the sun was always lower in the sky. Arctic winter would soon arrive, along with schoolbooks. The group of kids was having a blast. The little ones not yet school-aged looked on in wonder but carried on with their games unbothered. A little boy wedged down in a hole was feasting on an apple, entirely cool and collected. It was not yet his time for school. Two young girls came cackling down one of the village streets. Their life was simple; real life would come later. The old couple watched the smiling children. It may even have made them a little younger. — From the second edition of the book Faces of the North, published 2016.

From Faces of the North THULE 1987 Masauna—or the King of Thule as the hunters often call him—was one of a kind. There was no doubt who was boss on the ice. The remarkable composure he displayed and his uncanny way with the natural world made him almost supernatural. It was as though he shared a primordial connection with the sea goddess Sedna, who, according to lore, provides the Greenlanders with all the creatures they hunt for food. Masauna was the oldest and most seasoned hunter whom I accompanied out on the sea ice. He was as light-footed as a mountain goat; ballerinas couldn’t step lighter. Masauna didn’t seem to sleep much, napping with one eye open if something unexpected should happen. He sometimes leaped up from his sled—dead serious—and looked out at sea, but he was not disagreeable and never somber for too long. His mood was quick to lighten. He would grin when watching the young hunters bound between ice floes in pursuit of a seal they’d chased out on the ice. “Polar bear!” he’d yell, then raise his arms and laugh when he saw the hunters jump in terror from his imaginary bear. He had a spark in his eye when he watched the younger generation. Maybe he relived his youth through them. He would lose himself in the young hunters’ hunt, flail his arms and legs, cheer them on like a devoted sports fan. After a few good roars, he would sit down on his sled, smile, and laugh his infectious laugh. When Masauna was around, it didn’t matter if it was overcast: his face was like the weather—at its best, it shone like the sun.

After a two-week stay on the ice, north of Qaanaaq, the dogs had grown as weary as the men. They simply ate their food without mishap, smacked their lips, and howled until their hunger subsided. The ice fog created an air of mystery. Large icebergs peeked out from the fog that drifted over the ice. Dogs bayed in the distance, assuring us that there was life in the vicinity—although it was hard to say from which direction it came. The dogs are a man’s best friend on the ice, even if you don’t pet them all. They have different personalities. Some are good, and others are rascals. The battle for pack leader is often brutal. Within the pack, there’s a clear pecking order, and if a dog upsets that order, it runs the risk of the others attacking or even killing it. Likewise, the dogs can band together to do away with their pack leader. The day was done. The soothing sound of the dogs baying swelled with the growing cold, but then died down once they’d been fed until all was perfectly quiet. — From the second edition of the book Faces of the North, published 2016. #leica #greenland #natgeo100contest